Two days of pleasant autumnal weather for two days of racing. Each day it started dull and grey but slowly the sun broke through to make a warm late afternoon and on Saturday a lovely sunset.
On Saturday a good wind allowed an interesting course from Chichester westwards towards the central Solent and then up Southampton Water though with a decreasing wind. The triangles and sausages meant we kept in touch with the position of the others even as we crossed paths with other club races and some International racing yachts. Then it was way up Southampton Water to Marchwood where we crossed paths with cargo ships and cruise liners before rafting up before drinks and then supper at Marchwood Yacht Club.
Sunday saw a start line moved to avoid the other races then another interesting course initially westwards then back towards Chichester though with more triangles and sausages to test our sail handling.
A great weekend to finish the CCRC’s 2017 series of races though one retirement due to genoa problem and one due to main sail. 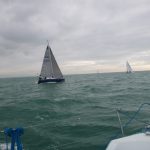 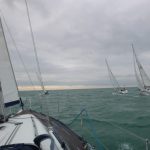 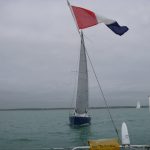 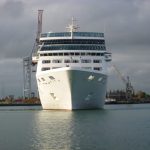 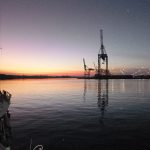 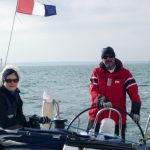 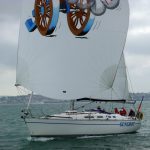