The weekend’s CCRC mini-series of races included one race on Saturday and two on Sunday with many attending a sociable barbecue at Northney on the Saturday night.
Saturday’s race was appropriately BBQ sausage shaped producing a long reach (aided for most by some downwind sails) and a beat/fetch depending on how close each could get to the wind.
Sunday’s first race was a short triangle speedily executed, but the second race with more legs was shortened at the first mark as the wind had died to almost nothing – only the fastest and most persistent finished. 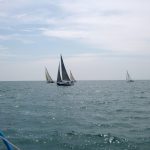