Sunday dawned bright and sunny but with little wind. CCRC boats had a relaxing morning while the Principal Race Officer fretted over whether any wind would arrive so we could have a race to Cowes. Eventually we cut our losses, the RO raised the flags and fired the guns to indicate cancellation and we all headed off to Cowes where most moored up at in the Royal Yacht Squadron Haven and some in Cowes Yacht Haven.
Then it was time to dress overall the boats and relax before dressing ourselves for dinner.
This special dinner at the Squadron was to celebrate 70 years of the CCRC. We had a tour of the Castle and then drinks on the lawn overlooking the Solent in brilliant sunshine. Then we were led into the “Platform” a room specially built for Queen Victoria where we were to have dinner. The dinner was splendid in menu and the social occasion of meeting members old and new. After dinner there were toasts to the Queen, an address about CCRC and its history, and then a toast to the continuing success of the Club. 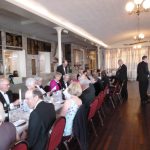 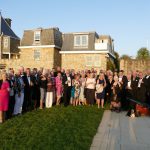 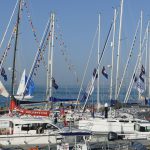