And then there were two (on the cruise). Valinor cruised back east as did Gunshot, Arcadia cruised on west, while Slipstream and Intrepid set out to cross the channel.
After two days of windy weather we had a forecast of little wind in most directions. We saw what we presume was the ship lifting the yacht that sank in the round the island as we passed the Needles. Then we sailed a bit, then motored most of the way, motor sailed a bit, and sailed a bit. We had thick fog approaching Cherbourg but the radar showed no ships – they were probably all watching France beat Iceland. 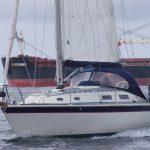