The bank holiday weekend saw CCRC having a mini-series of 3 races (one per day) plus a special dinner on the Sunday. All this was against a background of superb warm and sunny weather – though not always ideal for yacht racing.
Saturday’s race was from Chichester to Beaulieu. The race attracted 9 starters in the Alpha fleet and five starters in Beta. The winds at first were very light and a downwind start was set. In the first 30 minutes we had wind on the port quarter and then the starboard quarter, and then the bow! This caused sail changes, much trimming and some confusion. Some chose to head out to sea for more steady wind while others kept inshore out of the tide but by the first mark neither group had made any particular gain.
On the second leg the wind backed meaning downwind sails again for most. The race was wisely shortened at the end of the third leg though a few were unable to reach this as the wind dropped and the tide strengthened.
Then it was into Beaulieu River for drinks on various boats before dinner at the Royal Southampton YC’s Gins Farm. 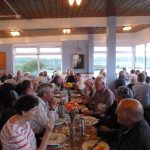 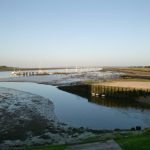 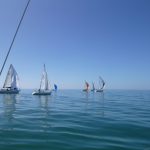