On Friday, 7th April, the CCRC Golf Team scored a hard earned victory over CYC at the annual Golf Challenge for the Wallace Trophy. This year marked the 10th anniversary of this event, held at Worthing’s Hill Barn Golf Course. The weather was glorious, the course in excellent condition and the result went right down to the wire and was only decided with the last putt of the final four-ball group out on the course. Of course, this year’s event was rather sad as we were without two of our regular golfers, Di Wallace and Richard Johnson, both of whom, as you all know, passed away during the past couple of months. It was therefore particularly fitting that CCRC should win the Wallace Trophy, originally presented by Peter Wallace for this event at the inaugural match. In Peter’s absence the CCRC team was lead by past commodore, Brian Dandridge (pictured). The team included two other past commodores of the Club – Roger Morris and Paul Chivers. Other team members included Phil Johnson, Ed Nettleton, Keith Feltham, Sue Dearden, and Jamie Morris. We were grateful for additional support from three guests two of whom regularly played with Richard Johnson. Our friends at Chichester Yacht Club have already booked the course for the 2018 running of this event and we hope that CCRC will turn out in strength, once again, to retain this well earned trophy.
Courtesy of Brian. 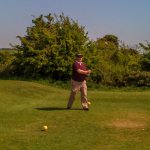