The CCRC Prize Giving Dinner Dance took place last Saturday at the Langstone Quays Hotel on Hayling Island.
At this black-tie “do” we started with a glass of bubbly and then a three course meal followed by the prize giving. Club trophies for 2019 were announced for all the winners for races, mini-series, season series, and other special sailing awards such as best performance in a race outside of the CCRC and long distance sailing.
A full list of who won what can be found on the CCRC web site at www.ccrc.co.uk/trophy-winners.
Then we were entertained by the “Simply Jazz Quartet” with some great music to which a number of us danced through until midnight. A great time was had by all. 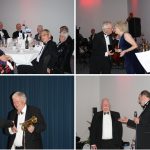