The long weekend saw CCRC’s Spring Mini-Series of races over the three days. Each day was different weather-wise, in participants, the races and the other events.
Saturday saw a blustery day with winds topping around 30 knots for a short race across to Wootton Creek for lunch at the Royal Victoria YC. Unfortunately one member broke his boom even before the race start – probably due to an unseen fault that had probably been there a while. With the fresh northerly breeze the pontoons in Wootton were “lively” to say the least.
After lunch some members headed back with other commitments while the rest continued on to Gosport where another member joined them as night fell to join the post-dinner party. It was a chilly night.
Next day the wind was less strong but still northerly and still a bit chilly. More members had rushed from Chichester Harbour to join in the next race. This race was from outside Portsmouth harbour up to The Hamble with an assortment of upwind, downwind and reaching legs. The wind was exceptionally changeable in strength and direction which led to many changes in the order of competitors. Then it was a champagne boat party before a roast dinner at the Royal Southern YC.
Next morning there was even less wind so the start was moved from Southampton Water to outside Portsmouth by which time there was sufficient breeze to hold the race. After a short upwind leg the fleet raced back towards Chi and then did a quick loop before finishing in time to enter the harbour just after high water. 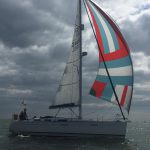 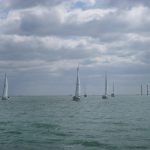 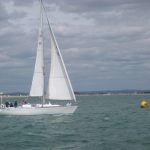 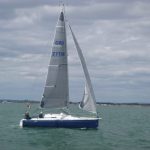