Sunday was the CCRC Barts Bash charity race and the wind was very mixed in strength and direction. Before the race start we had winds of 15 knots only for this drop to almost nothing just after the start; then, an hour later we had 17 knots again! We also had significant rainfall as a front came through. Our Barts Bash race was particularly taxing for each boats’ tactician (who was probably also navigator, helm and crew!) as the course consisted of a list of marks which could be rounded in almost any order and direction plus a mark which must be rounded fourth and another than must be rounded twice separately. Each boat seemed to reach a different conclusion as to the best tactic and sometimes met another at unexpected places. An interestingly different race and in aid of a good cause. 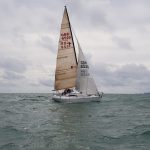 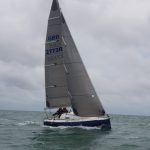